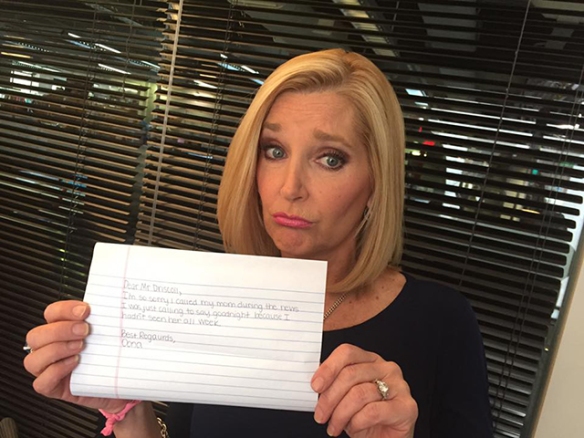 FOX29 Anchor Dawn Timmeney recently was mentioned on the national TV news trade Web site, TV Spy. Just not for the typical reasons the site mentions TV news — like a job switch or a ratings boost.

Timmeney was anchoring the news on a recent night, when her phone rang, on-air. Turns out, she made an honest mistake that many of us make – she didn’t realize her cell phone ringer was erroneously turned to “on”.

The story did not stop there. The caller – Timmeney’s 14-year-old daughter Oona – wrote an apology note to the station’s news director, so her mom would not get into trouble.

The note read: “Dear Mr. Driscoll: I’m so sorry I called my mom during the news. I was just calling to say goodnight because I haven’t seen her all week.”

Adds the Fox29 Web site: “In the end, Dawn’s boss thought the note was the sweetest thing, and Dawn looks forward to silencing her phone in the future!”