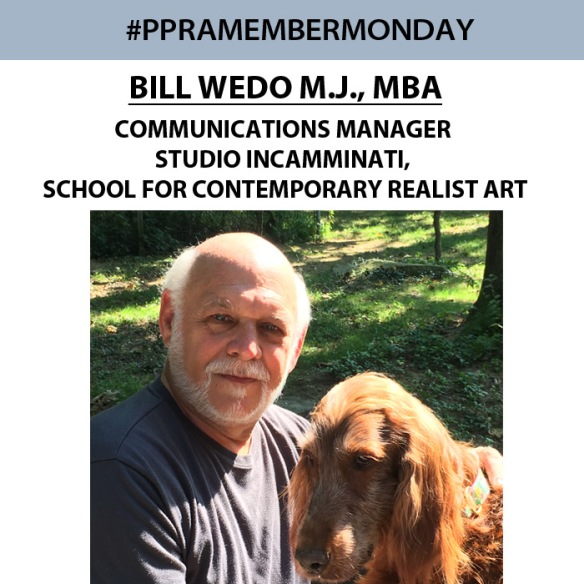 PPRA: Bill, tell us a bit about your background and your current job.

BW: I’m a recovering journalist who has worked in Norristown and Allentown, PA; Dallas, TX and at the Philadelphia Daily News doing everything from police blotter to investigating a congressman’s real-estate holdings to column writing. I was on the founding team of philly.com back in the screeching dial-up days when the technology changed weekly. Great fun. After that, I career-transitioned to Director of Marketing and Communications at The Academy of Natural Sciences (ask me how  a fossil fish got one of our scientists on The Colbert Report). Currently, I’m handling communications/marketing at Studio Incamminati, School for Contemporary Realist Art (ask me about that name). It’s a small – I mean, elite – art school founded by the artist who painted a host of celebrities from Princess Diana to Pope John Paul II (ask me about my chat with Supreme Court Justice Scalia’s Secret Service agent). I’m also a longtime college adjunct who has taught journalism, non-fiction writing and, now, public relations.

PPRA: Who are your clients and what projects are you working on right now?

BW: As Studio Incamminati’s in-house communications person, my clients range from students – current and potential – to the board to donors. I also work with the enrollment and marketing team at our partner, Chestnut Hill College. Recently, I helped produce a series of videos to spark student recruitment and donor support.

PPRA: What is your favorite part about your job?

BW: As the PR person for a niche art school with an odd name, a big thrill continues to be meeting someone who says, “I’ve heard of you” – even if they’re not sure what that name means. While we communications folks knock ourselves out solving the puzzle of earned, paid, owned and shared media, the ultimate goal remains simply getting through to someone. I also am fortunate to be surrounded by artists whose daily actions – seven hours a day at the easel? – remind me that there is inherent value in just doing what you love.

PPRA: What was your latest and greatest accomplishment at your job?

BW: It wasn’t the happiest of times – but effectively handling local and international press when the school founder, Nelson Shanks, passed away last year was a challenge. A few months earlier, he had stirred controversy – and some hard feelings – by pointing out what he called a visual reference to Monica Lewinsky in his portrait of President Clinton which had hung at the National Portrait Gallery. Of course, that was going to play in the obit. However, my job was to make sure it didn’t overshadow his amazing art career. In particular, William Grimes, who wrote the New York Times obit, did a well-balanced piece. By having a conversation with Grimes, instead of just answering his questions, I learned his wife was a painter. That common ground helped inform the story. I was again reminded that it’s called Public “Relations” for a reason.

PPRA: What one piece of advice would you give to your fellow PR pros?

BW: Beware those who give advice. With that caveat, I’d say: Read as much as you can. Spend some time thinking. Keep an open mind. See the humor. Because, really, a lot of life is pretty funny.

PPRA: What book or movie could you read or watch again and again?

BW: Film: Ridley Scott’s “Blade Runner,” including the director’s cut, the U.S. cut and the European cut. “I’ve seen things you people wouldn’t believe . . .”
Fiction book: “Winter’s Tale” by Mark Helprin – an exhausting but amazing read that’s literally a timeless love story wrapped in love note to New York City.
Non-fiction book: “The Shallows: What the Internet is Doing to Our Brains” by Nicholas Carr – forced me to look at communications in a new way

BW: The Reading Terminal Market. The selection of goodies is great, but the people watching is unparalleled.

PPRA: How do you take your cheesesteak?

BW: I do not discuss religious issues.