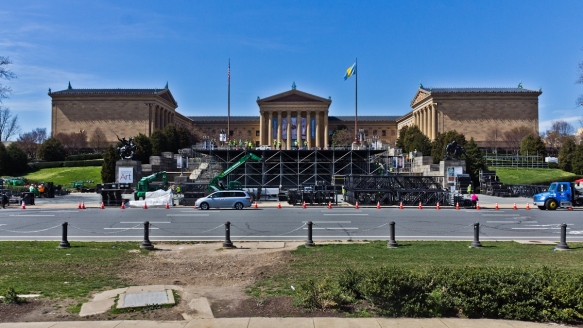 NFL Draft Day preparations on the steps of the Philadelphia Museum of Art. PPRA members heard the details of preparing for 200,000 football fans and extensive press coverage.

With nearly 200,000 fans expected, the NFL Draft is primed to be one of Philadelphia’s largest events of the year.

With a little more than three weeks until the draft on Thursday, April 27 through Saturday, April 29, the PHLCVB is working in partnership with Visit Philadelphia and the NFL to create a spectacular experience for fans. Ironically, Philadelphia is the birthplace of the draft, which began here in 1936 at the Ritz-Carlton Hotel.

The 2017 version of the draft,  the league’s largest fan-focused event, will focus on fan experience featuring a free three-day festival on the Benjamin Franklin Parkway with interactive exhibits, ziplining, autograph sessions and more. When draftees are picked, they will walk down the stairs as a symbolic tribute to Rocky.

While the NFL’s goal is to lure fans from both the area and afar, millions more will be exposed to Philadelphia images on telecasts from the draft. With nine NFL teams within a seven-hour drive of the city, Philadelphia is a prime location for the event. Fans are encouraged to get the Fan Mobile Pass to get exclusive access to one of the 3,000 seats on the Philadelphia Museum of Art steps.

It is expected that the draft will bring in $80 million in economic impact for the city. The event supports 26,000 jobs in construction, travel, hospitality and more. In addition to the draft, Philadelphia will enjoy a blockbuster sports weekend with the Penn Relays and two Phillies home games also taking place that weekend.

The PHLCVB is responsible for  fielding social media inquiries about the city from visitors, such as “Where is the best place to get a cheesesteak in the city?” Not only is it working towards creating positive tourist experiences, but also crafting positive messages about modern Philadelphia — a city much more vibrant than anyone could have imagined when the 1936 NFL Draft took place here!

Clarissa Ford, a PPRA Associate Member, is a Temple University junior studying Strategic Communication with a concentration in Public Relations and a minor in Sport Management.