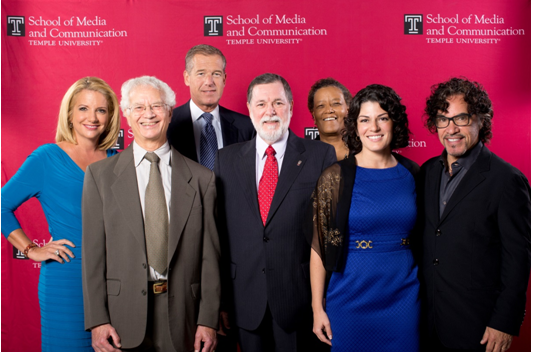 Life boils down to what you stand for, what you represent. The Philadelphia Public Relations Association (PPRA) represents its members, communication professionals who exhibit honesty, diversity, and cooperation. Meredith Avakian-Hardaway, President-elect of PPRA, represents all of these qualities and more. Meredith brings honesty, character and a healthy work-ethic to everything she does, from her role as director of communications and marketing for the Philadelphia Bar Association to her work promoting justice for Armenian refugees. For all of these reasons and more, Meredith received the Lew Klein Rising Star in the Media award on Friday, September 26, at the Lew Klein Awards Luncheon at Temple University.

At the awards luncheon, a short video played. The video, which featured Meredith’s friends, family and colleagues, displayed just how many lives Meredith has impacted on a personal and professional level. From her husband, Marques Hardaway, to Chancellor William P. Fedullo of the Philadelphia Bar Association, we learned how Meredith’s honest and professional character positively affects the lives of every individual she encounters. In her eloquent acceptance speech, Meredith managed to thank all the right people and find the time to help aspiring PR professionals; telling the crowd to “reach down to lift someone up.”

“She exhibits the very best qualities of a public relations professional. A highly poised and effective communicator, she has a creativity, vitality and passion for her work and a true devotion to advancing her profession,” said Mark A. Tarasiewicz, PPRA Hall of Famer and Executive Director at the Philadelphia Bar Association.

“My first impression of Meredith Avakian-Hardaway was that she’s a truly put-together woman with high aspirations,” said Lisette Bralow, current PPRA President. “We met through PPRA and at every meeting Meredith projected a professional demeanor. Most importantly, if she accepted an assignment, there was never any question that it would be completed on time with great attention to detail. Working with Meredith has been a pleasure; she follows me as president and immediately saw the advantages of working together to create continuity so that programs wouldn’t stop at the end of a presidency.”

Meredith knows the secret to forging real connections with people in a short time; you have to make a personal gesture. For Gina Rubel, President and CEO of Furia Rubel Communications, it was a handwritten note of thanks.“I met Meredith when I presented to her public relations class, she immediately followed up with a written note of thanks and we have remained in contact ever since. She is not only a wonderful PR executive and role-model; she is also someone I am honored to call a friend.”

Meredith is that special sort of person always actively seeking out promising young people to mentor; “everyone should be so lucky as to have a mentor like Meredith, as I have for the past five years,” said Jessica Lawlor, Communications Manager at Visit Bucks County. “She excels at taking young professionals under her wing and getting them involved in organizations that will help them develop professionally and make valuable connections.”

“Meredith’s thumb print is all over today’s up-and-coming Philadelphia PR practitioners. Countless new professionals I meet consider Meredith an inspiration, if not a personal mentor. And they should. Meredith is a consummate communicator, an inspiring professional, a generous volunteer and a natural leader,” said Christopher Lukach, President at Anne Klein Communications Group.

Meredith continues to help and impress everyone she encounters, making no one more deserving than her to receive the Lew Klein Rising Star in the Media Award.

This post was written by PPRA member Faiz M. Mandviwalla. Faiz is a junior at Temple University studying public relations. He also interns at the Philadelphia Bar Association where he has the pleasure of working with Meredith. Connect with him on Twitter @faizmand. For a pre- Lew Klein Awards post he wrote visit Temple University’s  PRowl  blog here.